Next up is former captain, Sophie Richardson. Sophie is now a Production Manager at the BBC and has a wealth of experience in the broadcasting industry. Read on to find on how Heriot’s helped to shape her career path in Television and Radio. 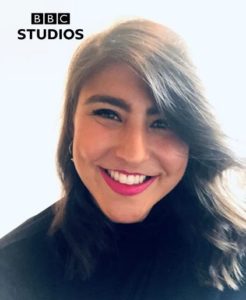 I currently work within the Comedy department producing TV and Radio programmes but have previously worked across Events, Entertainment and Factual productions too. Production Management are responsible for the day-to-day running of a programme – providing coordination, financial and logistical support from pre to post production.

For me, the Edinburgh Fringe was a hugely inspiring event and all I wanted to do was get involved with the Arts in any, and every way, I could. I was lucky enough to be awarded a Drama Scholarship at school and I undertook various jobs each Summer in the Festival which fuelled my enthusiasm for the industry. In my final year at Glasgow University, I volunteered throughout the month of August as a ‘Runner’ at the pop-up BBC Potterrow site. There, I got the chance to meet BBC’s Director General along with some Entertainment and Comedy executives who were generously keen to help with my career development. Sufficiently encouraged to take a risk, I moved to London in the hope of breaking in to the business…at this point, I met some supportive people in BBC’s Audiences Department who ‘took a chance’, giving me small ‘runner’ contracts to get my foot in the broadcasting door. These ‘runner’ roles created more chances to meet people in the industry, and I finally found my spiritual home in BBC’s Comedy Department. Securing my first proper contract in Comedy 7 years ago, my BBC career has evolved both artistically and geographically. Currently based within the Clyde’s Pacific Quay, there’s still so much more to achieve as a Coordinator and Manager on various productions. Recently, I’ve accepted a role as Co-Chair of ‘Women at the BBC’ – a 2,000 strong staff network, focussing on empowering and supporting women within the organisation.

On a personal level this question is an easy one to answer – I’m most proud of the enduring and incredible friendships I made at school. Heriot’s introduced me to lifelong friends who mean the world to me. I’ll always cherish the times we shared at school, while anticipating many more moments (I hope!) still to come.

On a professional level, it’s so difficult to pinpoint any single achievement, but it has been a real privilege to work with some of Britain’s greatest TV and Radio entertainers on programmes that I love and admire. I’m proud to have worked across so many shows: Two Doors Down, CripTales, The Farm, The Moments That Made, John Finnemore’s Souvenir Programme, New Comedy Award, The Museum of Curiosity, Newsjack, Strictly Come Dancing and so many more. I’ve had the honour of working alongside stars such as Sir David Jason, Nish Kumar, Harry Enfield & Paul Whitehouse, Maureen Lipman, Elaine C Smith, Noel Fielding, Lolly Adefope, and Jo Brand. Working alongside ‘famous people’ can be incredibly exciting, but I’m actually most proud of all the times I’ve been lucky to work with new and upcoming comedians. I really enjoy watching their talents develop as they are gradually recognised by comedy fans, and I look forward to seeing their names in bright lights in the future!

It’s impossible to think of school days without thinking of some of my favourite extra-curricular activities: among them, Drama, Football and Lacrosse! All the clubs and societies were run marvellously by teachers who gave us so much of their time and energy – going above and beyond for us all throughout the year. Two particular highlights come to mind:

Heriot’s opened up my life to unique and rare opportunities which taught me much about the wider world. It reinforced the lessons my family imparted on me about the importance of kindness, respect for others and crucially taught me how to be a happy and independent woman. I hold Heriot’s motto: ‘Distribute Chearfullie’ close to me every day and see no better life lesson than that!

There’s a vast range of careers out there with job titles and roles that you may not yet know exist, so I would encourage pupils to research new industries that excite you and investigate all the doors that could open for you.

Try not to put too much pressure on yourself to decide what you want to do just now – if you’ve got a strong work ethic and you’re willing to try new things, just give it a go! Life takes lots of twists and turns so you don’t need to have everything mapped out just yet…but still, have goals that you believe can be achieved.

Try not to compare yourself to your peers. Focusing on what is right for you is so much more important than status or titles. If you find a lifestyle and career that you love then you’ll make your daily life so much happier – loving what you do each day is so important, so make sure you’re passionate about whatever you choose to do!