With Scotland’s brilliant win at the Six Nations on Saturday, we are celebrating with a rugby success story from one of our FP sporting stars.

Cameron (2016) is a Heriots Super 6 Rugby Player (semi-professional), Heriots School Sports Coach and 3rd year Student at Heriot Watt University. He tells us how Heriot’s shaped his rugby career, what it’s like as a coach at the school and his plans for the future.

Remember to check out his video at the end of the interview which features some of his fantastic rugby highlights! 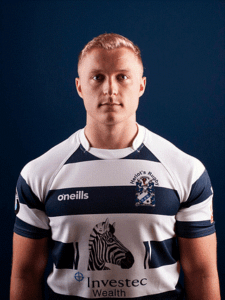 When I left Heriots, I signed with the Scottish Rugby Union as a Stage 3 Senior Academy contracted player aligned to Edinburgh Rugby. This was a full time contract that had me in training near enough every day. In addition, I decided to join Currie RFC to play for in the Scottish Premiership Rugby League. Simultaneously, I started my academic career attending Heriot Watt University studying International Business Management also on a full time basis, so as you can imagine – I was juggling a lot at the time!

When I was playing in a home game earlier this year, I bumped into my former school coach, Mr Harrison. I expressed to him that I would be delighted to offer my services to the school’s rugby programme, as I know what a great job he and Mr Easson do in running it. With some of my experiences I felt like I may be able to contribute in a small way to the pupils’ development. He got in touch a few months later to say that a position had become available and if I still wished to become a part of the team then I should apply for it. The rest, as they say, is history!

What are your most notable achievements to date?

Currently, I’m most proud of the fact I played and had the opportunity to captain Scotland U18/19 and U20s in a Junior World Cup friendly.

I also endured and overcame some serious injuries which, although disappointing, is positive progress – to come out the other side enjoying my rugby more than ever is an achievement in itself! Playing for Heriot’s Rugby Club was a support in that – it offers such an inclusive and collaborative culture/environment and I am honoured to be a part of that. I’m also proud to give back to the school knowing that I am an FP and current club player too.

What are your two abiding memories of Heriot’s?

Commuting from North Berwick to Heriot’s every morning meant getting the 07:17 train each day. Within my first week of moving to Heriot’s I left one of my bags on the train that was continuing through to Glasgow from Edinburgh Waverly. Thankfully, I remembered to grab my sports bag (the important one!) but left all my notes and school books in my rucksack on the train! About 3 weeks later it was reported to have been placed back on the train and I managed to everything back! Unfortunately, it returned with a Wednesday detention as I forgot the hand my late letter form in by the deadline – a great start to my first term!

It used to, and may still be, tradition that following the leavers ball (and subsequent night out) most of the year would walk up Arthurs Seat in the early hours of the morning to watch the sunrise together. Although my memories are slightly hazy, it still sits fondly for reflection as the people who I got to know so well in my two years at the school all enjoyed each other’s company together for one of the last times.

What are your two ‘takeaways’ from Heriot’s days?

One of the biggest things I have taken away from my school days was to treat everyone with equal respect. The school did a great job at controlling inevitable school egos and finding a way to make sure that it didn’t matter who you were, you are just as equal as the next person.

My time on voluntary service in 6th year at Astley Ainsley Hospital with the Headway House was something I took a lot away from personally. It made me extremely grateful for the little things and helped me recognise how lucky I am even in the worst days, as a lot of the members who use the facility have suffered freak accidents that have left them seriously impaired or disabled.

It’s extremely cliché but really ‘enjoy the moment’. There are many aspects of Heriot’s that, on reflection, I don’t think I stopped to enjoy at the time enough. It’s a fantastic school and walking into the grounds with the view of the castle in the backdrop is something that becomes really easy to take advantage of (especially as you’re not allowed to photograph it on your phone!).

But above all, enjoy it and whatever you pursue, some of my fondest memories are from my time at Heriot’s. You create a special bond with classmates that lasts – it doesn’t matter how long it’s been since you last spoke or saw one another, it always feels like you are just picking up where you left off.