Caroline Desmulliez (1987) was the first female Dux of Heriot’s and has gone on to qualify as an Actuary, working first for Scottish Provident and then Royal London. Read all about her journey as a Cambridge Mathematics graduate to specialising in Actuarial Science – an industry she has remained in since 1994. 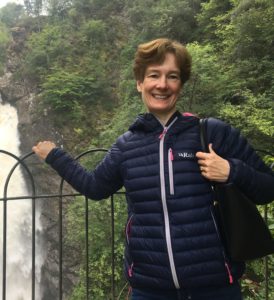 I’m an actuary working on a contract for Royal London. My work involves ensuring that a new software system correctly assesses the value of insurance contracts sold by Royal London. This is important because as a mutual company, it has no shareholders and so its profits belong to its policyholders.

After studying maths at Churchill College Cambridge, I realised how much I loved living in Edinburgh and so I decided to return there. Being an actuary was a good maths-based career if you lived in Edinburgh – at that time there were five or so Life insurance companies all based around St Andrew Square. One of these companies (Scottish Provident – sadly no longer with us) offered me a job as part of which I got to study Actuarial Maths at Heriot-Watt University for one year. This gave me several exemptions from the actuarial exams and I qualified as an Actuary a couple of years later.

I am proud of the fact that despite coming from a poor background, the opportunities Heriot’s gave me as a Bursar meant that I was able to become the first girl Dux and also to study at Cambridge.

I’m also proud of the fact that I have maintained a career whilst having a family – my husband Marc and I will celebrate our 25th wedding anniversary in 2021. I met Marc (who is from France) at Churchill College and we have two daughters aged 21 and 15.

Tell us your two abiding memory of Heriot’s:

I remember the Senior Hall – at that time it did not have the upper floor and was a very impressive space. It was the scene of the very daunting entrance exam I took at age 11, of the many assemblies I attended (these took place first thing every morning and were a good start to the day) and also all the public exams I took there.

I remember my maths teacher Mr Degenhardt – at the start of sixth year maths (I think) he drew a timeline across two blackboards and spent a couple of days taking us through the complete history of maths – a great inspiration.

The main lesson would be that whatever your background, with enough determination you can do whatever you want to.

The other lesson would be to show kindness to others and to treat others as you would wish to be treated yourself.

I would say that it’s important to think about careers when deciding which subject to study at university – try to find out what careers you could follow with a given degree as you will spend a lot more time working than at university!