The Junior School pupils have been taking part in some wonderful discussions with their teachers. You can read some of the answers below. 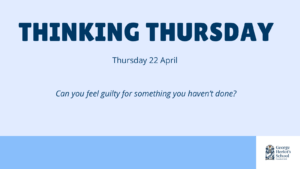 “No because you didn’t do it” – Victor

“No because you had nothing to do with it” – Charlie

“No because it was not your fault but if you dared someone, you could be guilty” – Oliver

“Yes because you could feel guilt for someone if they get into trouble even though it was not your fault, or if you read a book and you felt guilty for the person in the book” – Anna

“Yes, because you may have been involved in the situation but you still did not do it. Sometimes you also feel sorry for something and that can make you feel guilty. Another way of thinking of it is that you did not help” – Lilla

“Yes, i think you can because you may feel guilty for someone else” – Sonia

“No, because if you did not do it you should not have to feel guilty” – Alexander

“Partly, if you encourage someone to do it you would feel guilty. But if you know nothing about it then you shouldn’t” – Edward

“No because you haven’t done it” – Tom

“Yes because if you know about something and they got hurt, you would feel bad for not saying anything” – Tess

“I think you can because if a friend has done something wrong and you encouraged it, then you would feel guilty. Also if they were worried about what they had done I would feel worried for them” – Eve

“You can because if you are in a room or group and someone does something wrong, you can feel guilty on their behalf” – Hamish