The Junior School pupils have been taking part in some wonderful discussions with their teachers. You can read some of the answers below.

Do lies exist or is it just different degrees of truth? 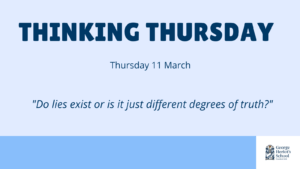 I think lies are different degrees of truth, because if you did something wrong and you didn’t tell, that’s not lying, that’s just not telling anyone anything – Eirene

I think lies don’t exist because nobody ever has to tell lies! – Isla

Yes because if people think something differently, the other person might think it’s a lie – Oliver

Lies do exist because we are hiding the truth – Alfie

I think lies do exist because one lie could change a persons life, for example if someone said “you are the worst in the class at football”, they might believe it and not play football when they could have chosen it as their career – Daragh

I think lies do exist because I say “I am the most important person in the world”, that would be a lie because everybody is important – India-Rose