Brodie (Class of 2020) has just been awarded the College of Piping salver, after winning this year’s MacGregor Memorial Piping competition.

The MacGregor Memorial is part of the Argyllshire Gathering and is for pipers aged under 22. Brodie’s performance of Lachlan MacNeil Campbell of Kintarbert’s Fancy followed on from his rendition of The Rout of the Lowland Captain which he played in the qualifying heat three weeks ago.

He travelled to Oban to the Argyllshire Gathering last week where he was presented with his trophy. 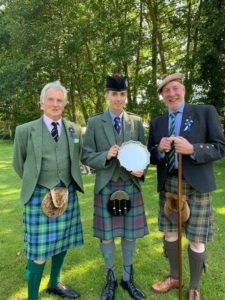 Brodie was the Pipe Major during his time at School and we are all very proud of his progress after Heriot’s.

George Heriot’s Pipe Band practice every morning from 8am – 9am and take part in numerous competitions throughout the year, including the World Pipe Band Championships that are normally held in the summer.