Next on the blog we have Ross McLaren 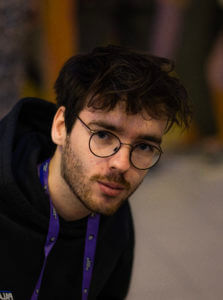 In my role I oversee the production and management of social media content for numerous Content Creators and Organisations. Over my 4 year career I have managed a network of over 10 million followers/subscribers, as well as amassing over 500,000,000 views on content I have worked on. My most viewed single piece of content having 27 million views as of the current count. Some of my most noticeable clients include; Fortnite World Cup Winner Bugha, NRG Clix, FaZe Jarvis, and the global gaming organisation Sentinels.

My journey actually partially began at Heriot’s. Although I had tried making YouTube videos when I was a lot younger, my love for video creation was reignited while working on a project in Mr Lowe’s English class. We were tasked with making a short film based on a Shakespeare play. As I didn’t enjoy being on camera I opted to take on more of a behind the scenes production role, specifically, editing the film. After that project, I edited a couple other short films in my spare time with friends.

Fast forward a couple of years, I was playing a lot more video games and wanted to try playing professionally. However, I realised I was never going to be good enough, but I still wanted to be involved in the industry somehow. That’s when a friend of mine told me about how pro players and content creators employ their own video editors for their YouTube channels, he said that I should give it a shot given my video editing experience, so I did. For the first 6 months I worked for free with multiple small creators while I learned the ropes and built up my portfolio and network. One day I met a Pro Fortnite player named Bugha who had only 15,000 subscribers on YouTube at the time, we instantly became good friends, and I started working on his content, getting paid for the first time in my career (albeit very little, but it still felt awesome). Only a couple months later he won one of the biggest E-sports tournaments of all time, the Fortnite World Cup, pocketing $3,000,000 at only 16 years-old. We gained nearly half a million subscribers on YouTube overnight. That day changed not only his life forever, but mine too. I’m very thankful that he decided to let me continue working on his channel over the next two years, during that time my career exploded exponentially, allowing me to work with numerous other high tier content creators and players, eventually leading me to my current position as the YouTube Manager for Sentinels.

What are you most proud of to date?

Being able to buy my sister her first car is probably the thing I’m most proud of. Also, with Sentinels we were nominated for Creative Team of the Year at the E-sports Awards, that’s something I’m very proud of.

What are your favourite memories of Heriot’s?

I think I’d be lying if I didn’t say my favourite memories are getting to spend time with my friends every day at school. Given that everything I currently do is online and LA based I don’t see people in real life as much as I probably should. Another thing I will always look back fondly on is my time in Mrs Donaldson’s Business Management Class, she is one of the primary reasons I decided to follow this path, without her encouragement I don’t think I’d be in the position I am today.

Try to make the most of every opportunity that’s in front of you. Five years ago, I would’ve had no idea this is what I’d be doing with my life, if I didn’t take this opportunity I’d probably be doing or studying something I don’t enjoy, but instead I have my dream job, doing something I didn’t even know existed until only a few years ago. You never know where an opportunity, small or large can take you, so if it’s something you really care about, give it 100%.