Next on the blog we have Katrina Lambert 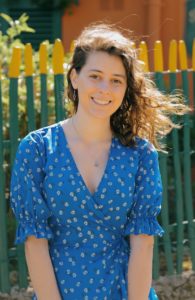 I am currently a full-time student at the London School of Economics (LSE) studying Politics and International Relations. Alongside university I am involved in activism on a variety of issues including gender equality, human rights, and youth voice.

From a young age, I have had a very strong sense of social justice and making sure people can use their voice, no matter who they are or how old they are. At the age of fifteen I first got involved with advocacy and campaigning, working with Girlguiding Scotland on issues ranging from period poverty to the representation of women in politics. From there I was able to meet young people from across Scotland and the UK doing amazing work on so many important issues – I was able to work with the local council in Edinburgh on youth participation on politics, the Children’s Commissioner in Scotland on young human rights defenders, and with the Scottish Government on the Year of Young People.

Since leaving school and moving to London I have continued with advocacy, becoming the youngest trustee of national charity Volunteering Matters, and recently working with the UK government and civil society on the impact of covid-19 on young people and the youth sector.

It’s been a privilege to be able to work on so many pertinent issues and meet so many other inspiring young people from across the world – my activism has led me to places such as the Scottish Parliament, the European Union and as far as the UN in New York and Geneva!

In June 2022, I was awarded the British Empire Medal, in the Queens Jubilee Birthday Honours for services to Young People, as one of the youngest on this year’s list. It’s an honour to be recognised through an honours system which I think is stereotypically associated with older individuals who have a long career stretching behind them. I hope in the future that even more young people are recognised with honours for the amazing work that they’re doing to change the world around them. Of course, the association with empire and Britain’s colonial history is something that makes the honours system less inclusive so I would urge people to check out the work of the Excellence Not Empire campaign (more details at https://www.excellencenotempire.co.uk/).

Some of my favourite memories of Heriot’s are probably in the History and Modern Studies department which arguably sparked a lot of my interest and curiosity in the world of politics. I had some amazing teachers who encouraged me to explore my interests and the world around me whom I have a lot to thank for. I was also an avid debater in my time at school so have a lot of memories of debate competitions across Scotland and after school on Friday afternoons!

My advice to current pupils thinking about the future is to not worry about having it all planned out – being open to opportunities and knowing what you’re passionate about is much more important than having everything set in stone. The rule I live by is this – do something you enjoy, something that you are good at and something that has an impact.