To kick off the After Heriot’s blog series in 2022 we have Julia Brown (Class of 2015). Julia has appeared in various television programmes and films, she also recently acted as a judge for Heriot’s House Drama competition – her toughest gig yet! Julia shares her knowledge of working in the performing arts and how Heriot’s inspired her to follow her passion; drawing attention to her teachers’ advice that she continues to follow to this day. 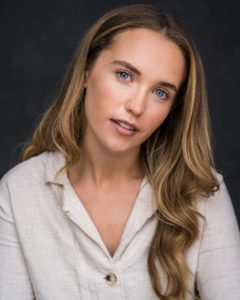 I am an actor working predominantly in film and television.

At the age of 16 I went to a casting call for the CBBC drama MI High. I landed a lead role and spent my summer holiday filming. From there I signed with my wonderful agent Ruth Young at United Agents and auditioned for LOTS of roles. I am very fortunate that several came my way.

What are your top achievements?

I’ve been very proud to be a part of every project I’ve worked on. A moment of personal joy for me was landing my lead role in the television series World On Fire. I had been in the casting process for two months and had been waiting for the final say for over two weeks. I had nearly put the job out of my head before getting the call to tell me the role was mine. I was also incredibly proud to be part of the Jimmy McGovern drama Anthony. We told the story of Anthony Walker, an 18 year old who was murdered in a racist attack in Liverpool, and what his life might have been like had he lived. I learnt so much on that job, educating myself on how to be a better ally and about how important it is to use art and my platform to support others. Being nominated for a best drama BAFTA for it was a really special achievement for us all.

What are your abiding memory of Heriot’s?

I fondly remember both the drama and music departments at Heriot’s. One of my favourite memories is when the two departments joined together to produce the epic musical Les Misérables in 2013. I was overjoyed to play the role of Eponine. I will always remember giving the wonderful Kelda Henderson an immense shock when I arrived to our dress rehearsal with bright, postbox red hair. It was dyed that day (without warning!) ready for my first television job. She laughed through gritted teeth and bundled me to the joke shop to buy some brown hairspray which she used to transform me back to early 19th Century France every evening.

Another highlight was travelling the UK with the Chamber Choir on a laugh-a-minute tour under the direction of the incredible Judith Buttars. Topping off my music career at Heriot’s, Graeme Brownlee trusted me with singing a solo in the remarkable Usher Hall accompanied by the 1st Orchestra and Heriot’s combined choirs; a task I would have never believed I was good enough for. The faith our teachers had in us will always stick with me. Opportunities like these, at such a young age, were a testament to the unique establishment Heriot’s is and a big reason for why I am doing what I do now.

What are your main ‘takeaways’ from your Heriot’s days?

The Heriot’s ethos of “Work Hard and Be Kind” has stuck with me throughout my adult life. A favourite teacher of mine, Cameron Wyllie, always emphasised the importance of effort but also of being happy. I try to live by these two rules. I don’t believe you can work hard “well” if you are not happy. Heriot’s taught me how important balance is. I try to enjoy my time off by socialising, travelling and relaxing. When I’m fully recharged I put as much effort as I can into whatever I’m working on. The guidance I received at Heriot’s taught me that if I’m ever struggling then asking for help is the best thing to do. Heriot’s also taught me that you never know what someone else is going through so being kind is very important…and it costs you nothing!

And finally…any top tips for current pupils when planning their future?

Work hard at whatever you’re passionate about. If you have an idea, go for it – you won’t regret at least trying. Try not to listen to self-doubt or compare yourself to others. Speak to everyone you meet and ask lots of questions about what they do – great opportunities come from networking and collaboration. Reward yourself for your achievements and allow yourself time to rest and recuperate if you feel that you need to. I’m a strong believer in what is for you, won’t go by you. Try not to fret too much if something doesn’t go your way, something more exciting is waiting just around the corner.

You can view Julia’s showreel here.