The next instalment of our blog features established Actor, Emun Elliot. Read on to find out how Heriot’s shaped his work on stage and screen.

We hope you enjoy reading and please get in touch if you wish to share your story ‘after Heriot’s’. 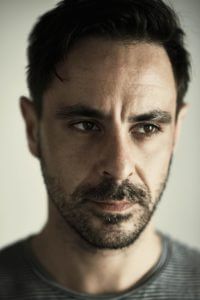 I am an Actor in Theatre, Television and Film.

After graduating from Heriot’s at the age of 17, I went to Aberdeen University to study English and French. After 8 months or so I left university to audition for The Royal Conservatoire of Scotland. Luckily, I was accepted, completed the 3 year classical acting course, signed with an agent and began auditioning for parts on stage and screen. My first job was at Dundee Rep in a controversial production of Alfred Jarry’s Ubu the King. The rest is history!

It’s hard to choose a favourite because every opportunity comes with its own ups and downs, however, I have to say that I’ve had the most fun doing theatre. As opposed to film and television, doing a play means you’re gifted with a period of rehearsal and exploration before presenting what you’ve discovered to an audience. I relish that process of discovery and because my passion for acting began on stage – I really feel like that’s where my heart belongs. Aside from that I just feel blessed to have been allowed to practice my craft for as long as I have – so many incredibly talented people aren’t so lucky. They say that 95% of actors are unemployed at any one moment so I genuinely just feel very privileged.

The first thing that comes to mind are some of the amazing, inspirational teachers I met along the way. Cameron Wyllie had an enormous impact on my development as an English student and without his influence, I’m not sure I would have become an actor. He taught a creative writing course and was responsible for introducing me to Tennessee Williams. The way he unpicked the text and his vivacious teaching style in general made the work so exciting and helped me bridge the gap between English language and drama. He’s a real force and is still a supporter and a dear friend. Coincidentally, he recently came along to watch me make my Broadway debut in none other than Tennessee Williams The Rose Tattoo in New York.

Any top tips for current students planning their future?

Follow your heart. Pursue what excites you and whatever makes you feel happy and fulfilled. Never compare yourself to your contemporaries and find a work ethic that suits you. And never give up! If you really want something, never lose faith in yourself and work as hard as you can to get where you want to be. Life is full of surprises so be ready to adapt to whatever opportunities come your way. Eventually you’ll get there as long as you hold onto that self belief.

To watch Emun’s show reel and find out more about his credits, please visit his agent’s website, United Agents.