Heriot’s motto is to distribute chearfullie and embrace charitable giving and kindness whenever we can. Sarah Dannfald (2006) proudly took this message forward beyond the gates of Lauriston Place, and utilises such an ethos in her day to day job at Children’s Hospices Across Scotland (CHAS) where she is a Community Fundraiser. Sarah talks about how she ended up in fundraising and draws attention to how Heriot’s impacted her career today. 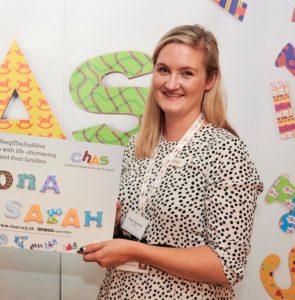 I am a Community Fundraiser for Children’s Hospices Across Scotland (CHAS) which is Scotland’s only hospice service for babies, children and Young People. As part of a team of 10, I am responsible for contributing £2.1 million to this vital service supporting terminally ill children and their families. For me, this involves supporting individuals, schools, community groups and businesses throughout Edinburgh, East and Mid Lothian and the Scottish Borders in their fundraising activities, as well as educating the public about CHAS and the work that we do, encouraging more people to support the charity.

As with most people working in fundraising, I did not set out to be in this line of work. I studied Sport and Exercise Science at Robert Gordon University, mostly because I was good at Biology and enjoyed playing hockey for both school and club, rather than actually wanting to pursue a career in that area.  After a gap year in New Zealand, there were a few interesting jobs along the way from working in a chocolate shop to a consultant for a diet company until eventually falling into an admin role at Marie Curie almost by accident. This change was not only was the start of my professional career but also changed the way I approach my work and my personal outlook on how I can help others. After 5 years at Marie Curie, a similar role at CHAS came up and I jumped at the chance to work in a smaller charity. Being able to work closely with Community Fundraisers showed me that this is where I wanted to be and taking a leap of faith in a part time maternity cover quickly turned into the role I love.

A huge part of my job is telling the story of CHAS families and the impact people can have on those families. So many people feel that what they might be able to give, or do, won’t really make a difference. But in reality, the real change for people in need comes from the many, not the few. Every child that sells cakes to their neighbours for 50p, every school that collects £100 at the end of a concert, every sports club that holds a race night; every single person can make a difference to another’s life. Quite simply, that is why I love my job. I can see the difference people make to the children and families that CHAS look after. The role of CHAS is to bring a little ray of light into the darkest of times for these families and it is a privilege to know I am playing a small part in that as well as facilitating others to do so too.

It would be easy to pick out the big partnerships I work on, like The Playhouse and The Lion King run raising an incredible £75,000 just before the pandemic ground fundraising to a halt. But in reality, it’s the smaller, more meaningful relationships I have built with supporters and volunteers that I am most proud of. One that springs to mind is a little boy who has been supporting CHAS for a few years now on his birthday by asking his friends not to give him presents, but donate instead. The first year he came into the office with his bag of money, he was so excited to show me and we sat together and counted it all out (it was about £80) then I wrote the big presentation cheque and we went outside for a photo while some of my colleagues were waving and clapping him from the window. He was so happy and proud of what he had achieved! Since then we have had 3 more birthdays, all with bigger and bigger sums bring brought in to be counted then during lockdown he decided to bake giant cookies and sell them to friends and family. Since he began he has raised close to £1000 for CHAS and I know I have a lifelong supporter in him. That’s what really matters to CHAS and the families we look after. People who are passionate about making a difference, however small it may be. It all adds up in the end and together we can reach even more terminally ill children who need our help.

Having been at Heriot’s from nursery all the way to S6, it’s hard to pick just a few memories that stand out! I will always have fond memories of playing hockey at Goldenacre and the friendships formed because of it, spending many a Saturday running non-stop up and down right wing! And of course, our tour to South Africa, which was an incredible experience and one I will never forget.

I have to mention my favourite teacher, Mr Stewart in Biology. I always remember him being such a lovely man who really ignited my interest in Biology. I can still remember his drawings on the whiteboard being meticulously copied into my notebook and then being able to picture them all so clearly during my Higher exam. It was the only subject I got an A in so he must have been doing something right!

Oh, and I should probably say that an abiding memory of Heriots was my wedding day! Having such a long history with the school – starting with my Grampa, then my Dad and Uncle attending and meeting their wives there, my cousins being christened there, my Mum being a Primary teacher – it made getting married in the chapel an obvious choice and a hugely special day for all the family. All our guests were amazed at how incredible the building is and there were quite a few Hogwarts remarks!

Tell us your two ‘takeaways’ from your Heriot’s days:

Of course, the school motto “I distribute chearfullie’ is something that has become ingrained in me and literally became my career. Having worked with lots of private schools across Edinburgh, I can safely say that Heriot’s has an incredible ethos of helping others and it is something to be very proud of. In a strange coincidence, in Primary 7 I was part of the school play Jinglin’ Gordie and at the end of the performances, we collected for charity with me holding one of the buckets most nights. It was not until I started with CHAS that I then realised we had been raising thousands of pounds for the very charity I would go on to work for over 15 years later.

I am sure most people don’t realise until they have left school, but looking back, we were afforded so many incredible opportunities, from learning from wonderful teachers, to going on amazing school trips (Aberfeldy and South Africa are both up there!) and having access to so many extra-curricular activities. And to do it all in such a fantastic setting, having Edinburgh Castle basically in the playground is quite a unique school experience!

It will feel like your current stresses are overwhelming and everything is riding on what are working on. As long as you do your best and focus on what interests you, everything will work out in the end.