It’s the end of term here at Heriot’s and we are celebrating with a blog post from a Former Pupil who now also works at the school – Mr Phil Lowe (1998). Phil spills the beans on life at Heriot’s then and now and offers his pearls of wisdom to current and former pupils. 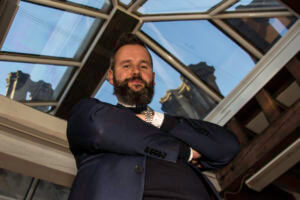 What was your career ‘journey’ back to Heriots?

I really enjoyed English at Heriot’s, and was very lucky to have three brilliant teachers: Mr Grant (with whom we did Brave New World and The Catcher in the Rye), Mr Tait (who taught me my favourite Shakespeare play, Measure for Measure) and Mr Wyllie (One Flew over the Cuckoo’s Nest- certainly one of my all-time favourite novels and films). My interest in teaching was sparked, and I went to Glasgow University to complete an Honours in English Literature. It was here that I started to develop more of an enthusiasm for Irish Literature and Modernism: I had some fantastic lecturers and tutors, but the one who stands out was Paddy Lyons, a fearsome figure who was infamous for shouting at students for coughing in his lectures! He was also an extremely generous person with an incredible knowledge; he genuinely cared about his students and enthused us with his love of Joyce and Yeats.

After graduating, my first teaching job was in Caldervale High School in Airdrie which was a rewarding and challenging environment. The English Department were fantastic: I had great support from each of them, and they made me feel like a valued part of the team. I still remember my four classes from this year: there were some lovely young people who helped me realise that I’d definitely made the right career choice.

Unfortunately, Caldervale were not able to keep me on in a Full Time Capacity, so I applied for a job at George Heriot’s, was very privileged and fortunate to be accepted, and in the words of James Langston Hughes, ‘I’m still here!’

Personally, and whilst it may be a bit clichéd, it’s got to be my twins, Sofia and Matteo. They’re four now, and they make me laugh every day (and experience a range of other emotions too, as those who know me may well imagine!) But they are great fun: their take on everything from music to dinosaurs to Frozen to football to The Twits is endlessly fascinating. I am very, very proud of them both.

Professionally, I was proud to be asked by The Principal to speak on behalf of the staff to The Sunday Times recently, where Heriot’s was named ‘Independent School of the Decade’. I really enjoyed giving them a sense of the school’s core ethos and work-ethic, as well as conveying a small flavour of the excellent Learning and Teaching that goes on here. It was a great honour.

What are your abiding memories of being a pupil at Heriot’s?

I learned to play the trombone, and was an enthusiastic player in the many different ensembles that the Music Department offered. In particular, I really enjoyed learning about jazz music from Mr Bill Simpson and Mr Neil Munro. That said, my two abiding memories are both of the Usher Hall: the first time, in S1, I played in the orchestra performing Gershwin’s Rhapsody in Blue (a performance which included a memorably virtuosic clarinet glissando by a certain Mr Brownlee!) Later, in S6, the same Mr Brownlee gave me the distinction of performing the Rimsky-Korsakov Trombone Concerto with the Concert Band. Playing in such a magnificent venue was always a real privilege – a spell-binding experience for which I’m very grateful.

What are your ‘takeaways’ from your Heriot’s days?

At school, I developed a love for Hibernian Football Club and NBA basketball, so here are two life lessons from that world of sport epitomising what I learned at Heriot’s:

Be adventurous, be yourself and take chances. There are many more interesting and rewarding careers out there than those offered by a degree in Medicine and Law. Also, when you are in the world of work, remember to treat everyone with whom you work with respect and dignity: try to make time for everyone in the organisation, no matter how big or small the role they play may seem to you.