Our May ‘blogger’ is TV superstar, Erika Budd (2013). Erika is an Associate Producer in Television, specialising in casting for the Entertainment strand and has worked across numerous high profile shows. We caught up with the broadcast guru to find out how her Heriot’s education helped her achieve her dream job. 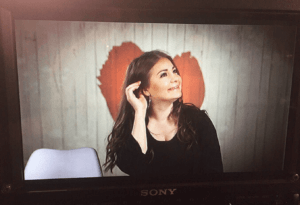 I am an Associate Producer in Television, specialising in casting for the Entertainment strand (e.g. reality television, talent shows and dating shows). Over the past 5 years, I have cast contestants and contributors for shows such as Britain’s Got Talent, X Factor, First Dates Hotel, Celebrity Big Brother and The Circle US.

Currently, I am working on Series 2 of Celebrity Ex on The Beach for MTV. This month I am heading to South America for a seven week shoot – which I am extremely excited about!

After leaving Heriot’s, I studied at The University of York; BSc in Film and Television Production. I absolutely loved the course and recommend it to anyone looking to start a career in film or television.

Whilst studying for my degree, I gained industry experience as a runner & junior researcher at BBC Scotland as part of their work experience summer programme. This amazing opportunity allowed me to get my foot in the competitive world of television while still at university.

After graduation, I moved to London to embark on a career in television.

Tell us your top achievements to date?

For me personally, my greatest achievement is fulfilling my dream of working on some of the big television shows that I used to watch and love as a kid! I have had some “pinch me” moments in my career so far; seeing my name as the credits roll at the end of a show I have worked on, is always an amazing feeling.

Other memorable achievements for me relates back to my time at university. One of the documentaries I created and produced, won a Royal Television Society Award (1st runner up award). On graduation day I was awarded the top academic prize in my year. I realised that when you put in a lot of hard work – it does pay off!

What are your abiding memories of Heriot’s?

One takeaway/life lesson from Heriot’s is work hard at whatever you choose to do in life – whether it is training to be a lawyer/doctor or choosing to be an artist! Choose a career you love and have a passion for.

Another takeaway is the lifelong friendships I made at Heriot’s; friends I have known since I was 5 years old in P1!

My main tip in terms of choosing a career is to explore many options while in school. Once you choose what you want to do, put 100% into it.