Corey is one of the Senior pupils who features on the ‘Wall of Fame’ in the sports department for representing Scotland U17 in Athletics and he has had a record-breaking year so far.

Corey raced in the British Milers club event in Leeds in April, competing in the 3000m race in a time of 8:17.9 which is a new Scottish U17 record!

Corey also had a fantastic performance at the Scottish Schools Athletics indoor event earlier this year, competing in the O16 boys 1500m. Corey won a gold medal and a new championship record of 3:55.90. This is a new Scottish U17 indoor record which previously stood since 1981 and he was delighted to receive a reply from the previous record holder via social media….

“Congratulations Corey…it was my record that stood for 41 years, I didn’t think it would last 1 year let alone 41! Awesome running and best wishes for the future”

We can’t wait to see what is next for Corey. 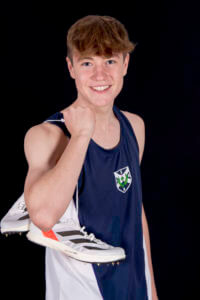