Despite our journey starting very early on the 15th of June, our trip ran smoothly and we arrived in both Madrid and Zaragoza without problems. We arrived in Madrid around 10:15am (local time) and took a bus to the train station, from which our Heriot’s students enjoyed the views of some of Madrid’s most iconic landmarks in the city: La Puerta de Alcalá, El Retiro, el Banco de España, La Cibeles or Neptuno.

Once in Atocha train Station, our students had some free time to eat some snacks or go shopping before getting on the high-speed train. Travelling at an average speed of 250 km/h, the second leg of our journey passed by in the blink of an eye. During this hour, our students talked, played games and also studied Spanish. Suddenly, we were in Las Delicias train station and nerves started to kick off: our Spanish partners were there, we could see them waving at us, eager to meet the Heriot pupils. Some with shaky legs and others more confident, the students from Heriot’s went up the escalator and, finally, they met their Spanish host families in person. Soon after that, all the Scottish students went off with their correspondent families. Their Spanish adventure had already begun.

On Sunday the 16th of June, Mister Thain and Miss Llorente, together with two Spanish teachers (Raquel and Cristina) met all the exchange participants at El Parque Grande. We spoke with our Scottish students to find out how they got on the first day with their partners and everyone had a great time: they enjoyed the Spanish cuisine; some went to the swimming pool; others went to the city centre where they enjoyed the Medieval market and, most importantly, everyone tried their best to speak in Spanish.

After a brief walk around the park and a trip in the tourist train, all the exchange participants stayed in the park to enjoy the sun and off they went with their Spanish families to make the most of all the activities they had prepared for their Sunday afternoon and evening.

Its been a really hot day in Zaragoza and we had a long morning touring the city, that’s why our partner school (Nuestra Señora del Carmen) has welcomed us to Spain with a delicious breakfast: “chocolate con churros”. After gathering strength to walk around the city for a few hours, the Spanish students have kindly showed the school to us. Here we have learnt about the Spanish education system and about the differences between Spanish and Scottish schools.

At 10am, we left Nuestra Señora del Carmen to meet our guide in La Plaza del Pilar. We’ve visited La Basílica del Pilar, where we’ve seen the statue of the Virgen and the first pillar of the cathedral (some of our students have touched it or kissed it according to the tradition). The guide has explained how the cathedral was bombed (we could see the holes left in the ceilings) but luckily no-one was hurt; and how Goya, the famous Spanish painter, painted one of the vaults in 42 days. Then, we have taken some photographs from el Puente de Piedra (The Stone Bridge) before having a break to get some refreshments.

At 12:15pm, we’ve continued our tour with a visit to La Seo. For those who don’t know it, Zaragoza is the only city in Spain with two cathedrals. La Seo was the first cathedral in the city until La Basílica del Pilar was built, and this can be seen in the different architectonical styles (unfortunately, photographs are not allowed inside La Seo).

After visiting La Seo, we have been taken to see the Dean’s arch, and arch which links La Seo with the Dean’s house. Legend has it that the Dean wanted an arch similar to the one the Bishop had to go from his house to the cathedral. As nobody wanted to build it, the Devil appeared and told the Dean that he would build an arch for him but there was one condition: he would keep all the souls of the people who walked underneath the arch. I’m afraid that all of us had to walk under this arch to continue our tour.

Finally, our tour has concluded with the visit to the ruins of the Roman theatre which was built to entertain the people of Caesaragusta (Roman name for Zaragoza) in the I century a.C. From here, our pupils have gone back to their partners’ houses to have lunch and to enjoy the rest of the evening.

Zaragoza has been the hottest city in Spain today with 36ºC, but luckily, we’ve been out of the city for the day.
As usual, all the Scottish students met at 8am at Nuestra Señora del Carmen School. We discussed today’s trip and talked about our pupils did last evening. Then, we met our Spanish partners to play the Spanish version of the game “Mafia”.
At 9:15 am, we left the school to go to El Monasterio de Piedra, an old monastery near a village called Nuévalos, in the province of Zaragoza. Literally “the Stone Monastery”, this area is named after the river which flows by the monastery: the river Piedra.
The journey took an hour and a half but it was worth the visit. After eating some snacks, we went into the Natural Park which surrounds the Monastery. The first thing we did was seeing falconry exhibition in the park. When it finished, we started to walk around the park and admiring the waterfalls, ponds and caves which are found in the area. The characteristic landscape of this area is the result of water flowing and eroding the rock, which has created interesting shapes. Our Scottish students loved the beauty of this park.

We left the park and had lunch and some free time near the monastery, which was our last stop. This monastery was built in the XII century, this, replacing the fortress which was in the area up to that moment.

Around 5pm, we started our journey back to Zaragoza, where we arrived by 7pm.

Today has been a quiet and relaxing day, exactly what we needed before going to Port Aventura tomorrow. Around 9.30am, we went from the school to a shopping centre called Gran Casa. We got there by tram. There, we watched a 3D film about Energy and then our Scottish students had some free time in the shops. At 1pm, we went back to the school and at two, the Scottish students went back to their partners’ houses for lunch. I suspect that most of them spent the rest of the day cooling down in the swimming-pool. 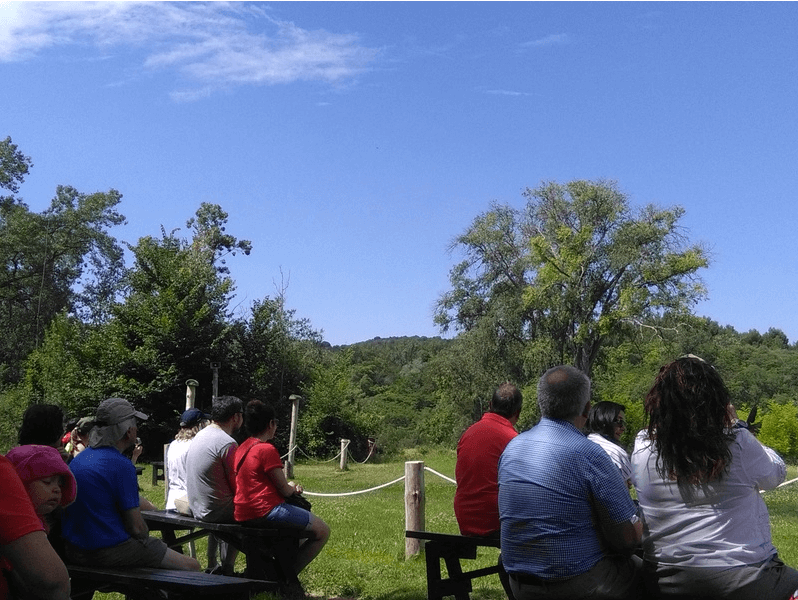 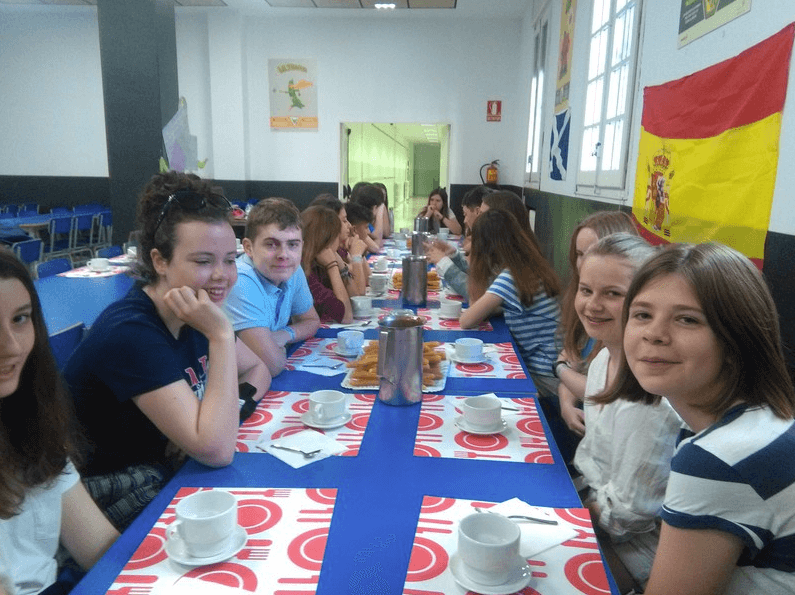 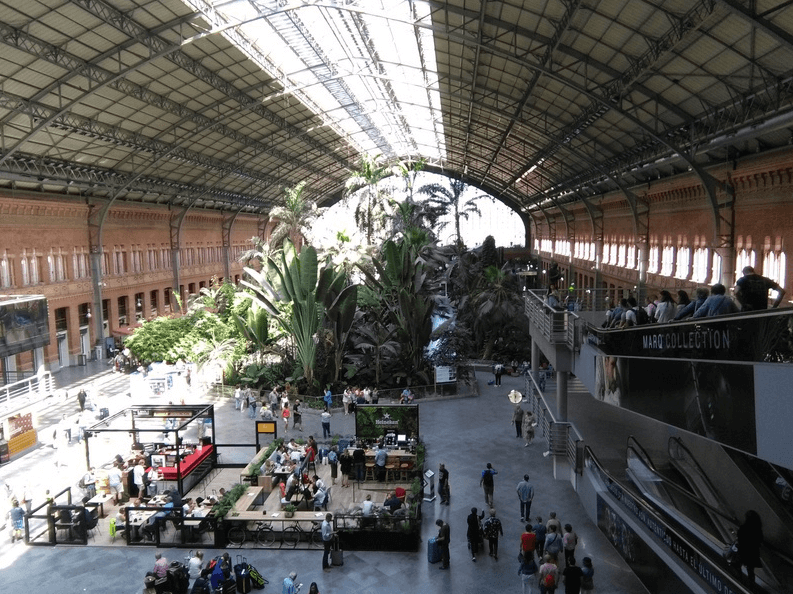 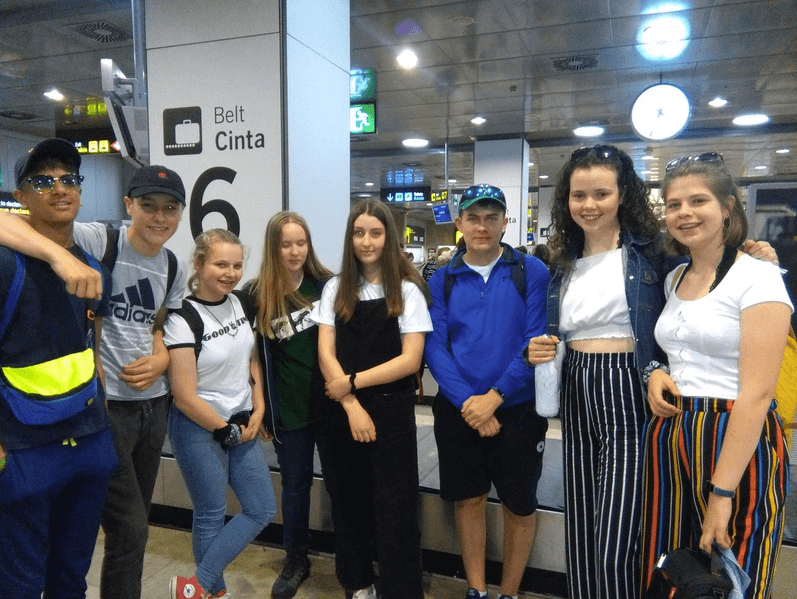