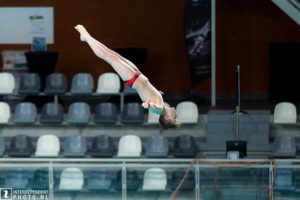 Lachlan (now S5) started his journey in diving at 7 years old, which followed him being selected as part of Scottish Swimming’s first TID (Talent Identification) process for diving in Scotland. This was run through primary schools based in Edinburgh back in 2013. He was selected at the end of the assessment process as one of the 40 selected to be potential future divers – ranging from 7 – 11 years old.

In the first 4 years he steadily developed from Novice to the Elite Potential Squad. During this period, Lachlan represented Team Scotland at Novice level, on two occasions, helping the team to win the Celtic Cup both times. He also medalled in many competitions throughout UK, Sweden, and Ireland.

In 2018 Lachlan also managed to be selected to the first level of the GB Diving Pathways, being one of the 12 top athletes in his age group. Being on this pathway, lead him being promoted to the Elite Squad, which meant he was at the standard to compete at the British Junior Elite Championships – which he duly did in this year. He did not get into any of the finals, but it was a great experience, putting him in a good place for successful competitions throughout the next 3 years, both in UK and Europe.

During this time, he became Scottish Champion for his age group each year and represented Team Scotland again on two occasions, this time at Elite level, over in Eindhoven. He managed to win gold medals in many of his disciplines; 1m, 3m and 3m Synchro each year.

His second showing at the British Junior Elites, in 2019, saw him getting into the finals for 1m, 3m & 3m Synchro – where he finished 4th, 1st and 3rd. Gold medal in 3m Springboards meant he was crowned as the British Champion.

Once the lockdown was finally over in March, full training started back again in preparation for the delayed (from Apr 2021) British Junior Elite Championship, which took place in Plymouth and Lachlan finished in the top half in 1m & 3m Springboard and came 3rd in 3m Synchro.

We wish Lachlan the best of luck for the upcoming competitions.