Well done to Emma in S1 who has been announced as one of the winning designs for the Creative Earth Competition, organised by the UN Climate Change Conference for 2021.

The Geography department set pupils a task during lock down, to enter their vision of the planet of the future and there were some fantastic entries.

The Creative Earth Competition panel of judges included Geri Horner, Cel Spellman, Simon Reeve, Muriel Gray, Alfie Bowen and COP26 President Alok Sharma. They received thousands of entries from young people across the UK but were particularly impressed and inspired by Emma’s entry, which will be displayed for world leaders at the COP26 Summit in Glasgow this year.

To find out more about the Creative Earth Competition click here 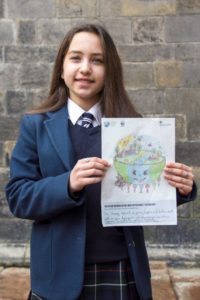