Our Combined Cadet Force continues to thrive with the Cadets active and busy within their sections and the session’s new recruits starting to get to grips with basic training.

There is a multitude of FPs in the military, across all three services and, currently, we have a large crop within The Royal Regiment of Scotland. The vast majority of these FPs have been members of the school’s CCF and therefore it’s always lovely to hear from them.

The pictures are of three men currently serving with 2 SCOTS, all of whom were dedicated members of the CCF, ARMY section. All were trained by the current CCF staff – something of which we are very proud! Malcolm Hawkins, Contingent second-in-command said, ‘It’s very rewarding to have played even the smallest part in their development. To be able to give them the skills and platform, from which they have been able to launch this terrific career, is gratifying. Of course, most of the hard work is theirs, we just provide the foundations.’

The men are (from left to right): Captain Jamie Bamford, Officer Commanding Recce Company, 2 SCOTS. Major Grant Milne, Regimental Medical Officer, 2 SCOTS. Major Finlay Anderson, Officer Commanding A Company, 2 SCOTS. They have just returned from a deployment to Oman, which was part of the Land Regional Hub conducting Defence Engagement and Training with UK partners in the Royal Army of Oman. The photographs are taken at the return party in 2 SCOTS Officer’s mess.

We have many other former cadets serving too, including one currently at the Royal Military Academy Sandhurst and another due to go in September. We have a former cadet who has recently passed out as a Royal Marine Reservist, earning the coveted green beret and many who have joined their University Officer Training Corps (OTC).

CCF staff would be delighted to hear from any former cadets – from within the military or otherwise, in order to keep abreast of what people are doing. 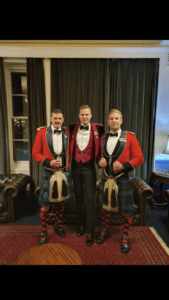